once more, from the top

On Learning a Second Instrument

I’ve started learning (re-learning?) guitar in a serious way. It makes me wonder if I never learned my primary instrument at all the right way.

I’ve played the dobro for about 10 years now, and I’m starting to feel limited by it. I’m also starting to be acutely aware of my limitations on it. For one thing, I’m totally self taught, and I’m starting to realize I have a lot of bad habits. Bad habits are hard to break! Especially when music is a big form of socializing and relaxing for me. Now, instead of using music being an outlet for my frustrations, it’s started to become a source of them. That’s awful! But with the guitar, I don’t have any of that (yet) - I’m still so new that I start to get past a baseline of capable before I can really begin to be critical of myself for not being good.

Additionally - if I ever get halfway decent at the guitar, I can at least begin exploring a few other genres. I love the dobro, and I expect that I’ll never stop playing it, but there aren’t a whole lot of genres that the instrument fits into. Even within those genres, there’s not a whole lot of sonic space in which the dobro can contribute. It’s really hard to contribute substantially to the rhythm or groove on a steel instrument. (It’s not impossible to do it, by the way. Andy Hall can do it. Ralph Mooney could do it. They are also both some of the greatest steel guitarists ever to live, however, so I don’t think “groove setting” should be the basis by which we judge competence. If anything, it’s a sign of mastery.) It’s also pretty hard to get hired into a pickup band on the dobro - it’s not a super in-demand skill in my part of the country. Such is life in Boston, home of a bazillion great fiddlers.

I’ve been running through Dan Miller’s Flatpicking Essentials course to get started. It’s a good starting point for me, as I’m not a total fresh start on the guitar. I know all of the chord shapes, and the theory behind them, and I have some leftover muscle memory from playing guitar as a teenager. Still - it’s been lots of metronome time, lots of basic moves, lots of attention to form, and lots of repetition.

Having a book has made things so much easier. Barely any good written learning material exists for the dobro. You have to figure just about everything interesting out by ear. This was an awesome skill builder for me back when I was college, and had nearly unlimited free time. As an adult, I don’t have the time or the patience for it. A book that gives some standard exercises that build gradually in difficulty is a godsend to a busy adult. It’s also a godsend of annotations. I write in it! All the time, in fact. I also use it as a kind of practice journal. Wherever there is an exercise I’m working on, I add a Post-it Note. Whenever I run through that exercise, I list the date, metronome setting, and key (if the key I practice in transposes to a different one from the example). 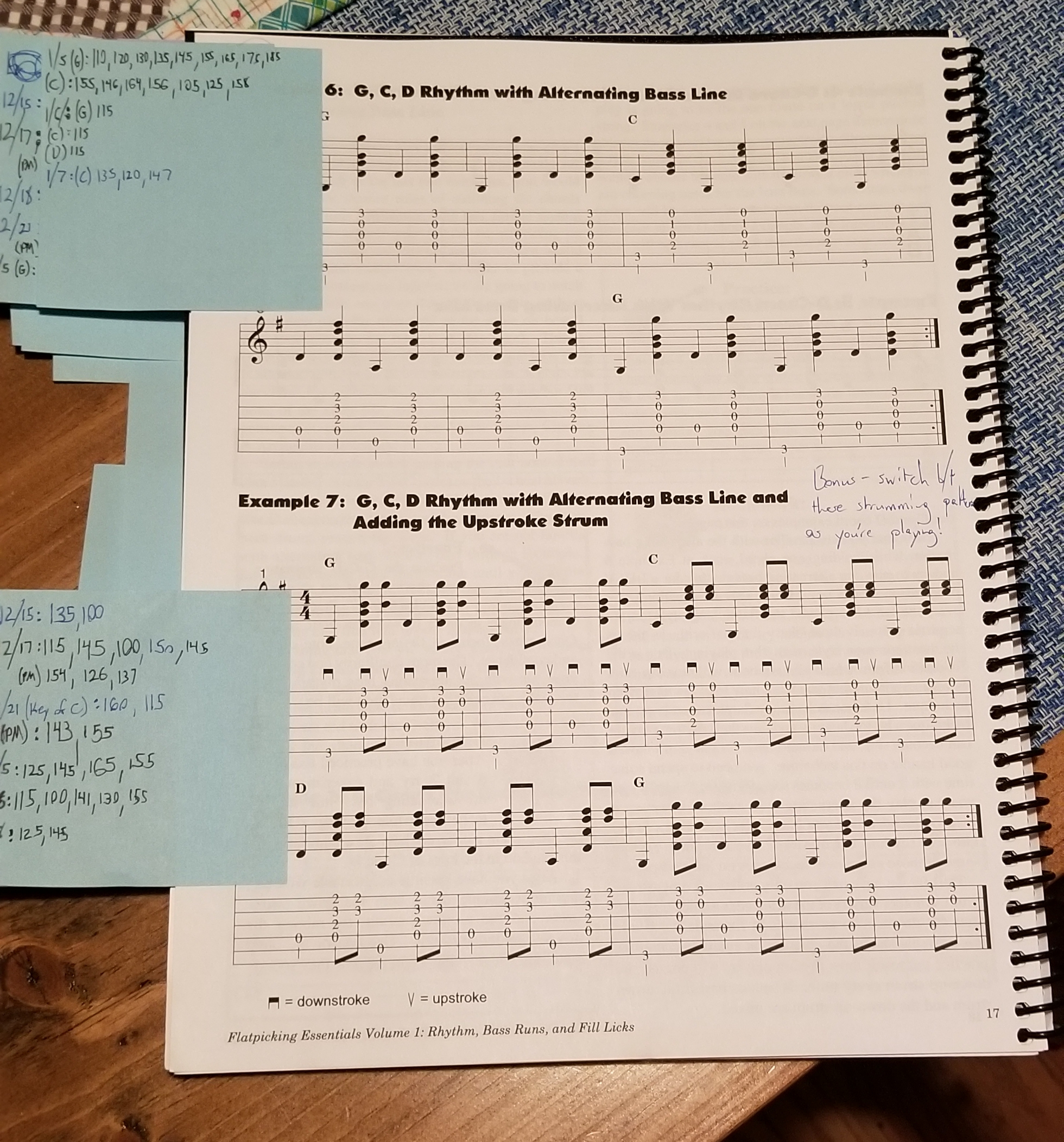 This has been enormously helpful. I’ve done practice journaling before, and it’s been a huge boost to my playing when I do. Keeping a practice journal inside a music book is just that much better - it’s one less item you have to keep track of. It’s also a kind of “scorecard” for my progress. I can easily figure out the fastest rhythm I’m comfortable at, and what obscure click setting I should try to get comfortable with next. It’s also a nice reminder of how fast you progress when you use a metronome. I’ve been keeping tabs in the book since the end of November, and I’ve progressed a ton - from barely being at 100bpm, to being nearly at 190bpm. Cool!