Now that we’ve got the basics of floating gate operation under our belt, it’s time to talk a little more about how to string together a bunch of floating gates to make an actual NAND Flash IC! (If you’re not feeling so up on these concepts, have a look at part 1 and part 2 for a quick recap of how NAND Flash stores data.) We’ll start at the same level that we did in the previous article - the floating gate transistor - and zoom out from there.

We’ve seen how to store a single bit using a floating gate transistor - it’s as simple as charging or discharging a floating gate. Unfortunately, one bit doesn’t do us much good as far as information storage goes. The good news is that it’s pretty easy to string together a bunch of bits to store multiple bit values - it’s just as easy as chaining multiple floating gate FETs together: 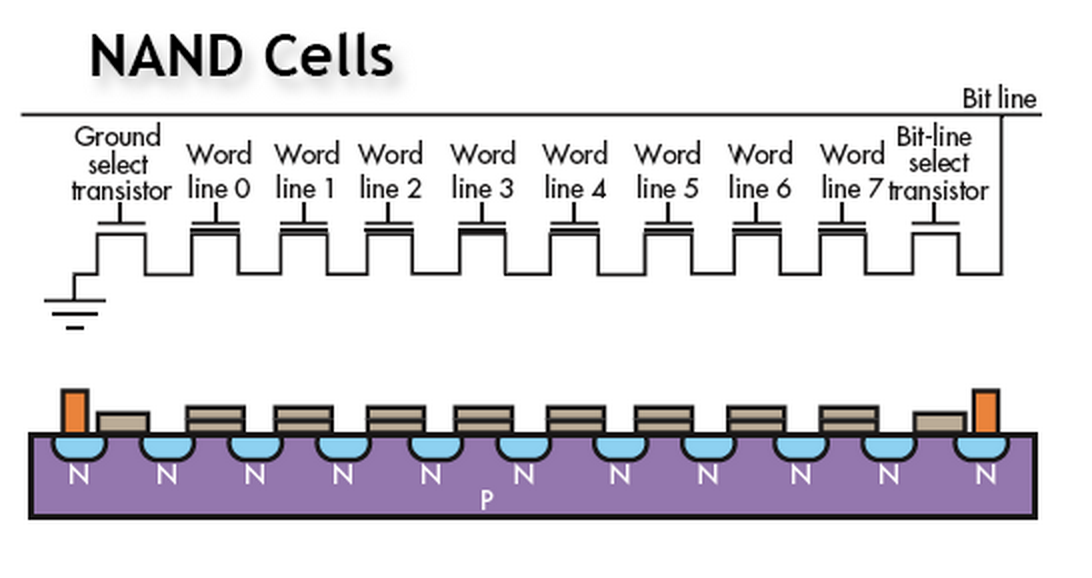 As you can probably guess, this structure stores eight bits in eight separate floating gate transistors. This is a byte array - it contains an eight bit byte spread across eight transistors. Let’s say we want to read the value of bit 4 in this byte array. To read bit 4, you simply have to do the following:

And there you have it - in a mere ten transistors, we can store a whole byte of data!

Well, we can store a byte, but there’s an obvious drawback here. If we store a byte using a byte array, we can only get at it one bit at a time. Luckily, this system of storing a byte scales pretty well. If we put eight of these byte arrays back to back, we can store eight different bytes independently, with each byte corresponding to a single word line.

At this point, you have the most basic foundation of turning floating gate transistors into a big array of memory - the only limiting factor of this architecture is how much capacitance you can burden the sense amplifier of each bit line with.

At this point, you’re pretty familiar with this image of a floating gate transistor:

Simplified Side View of Floating Gate FET (Courtesy of EETimes)

While really nice for the purposes of explanation, this doesn’t look anything like a real floating gate transistor. In real life, those gates look something like this:

Boxed in red are the structures that represent a floating gate transistor. Though this doesn’t look much like the nice, clean images we’re used to seeing, everything in this image maps pretty nicely to stuff we’ve come to understand conceptually. Section A shows the substrate, section B shows the control gate, and section C shows the floating gate. You can just barely see the oxide layers separating each of the silicon structures - thin, pancake looking deposits between each of the boxed layers. Note that everything you’re looking at here is really, really, really small in real life. In this picture, a centimeter corresponds to approximately 90 nanometers. For comparison, the minimum width of a human hair is generally 17 micrometers - about two hundred times the size of the structure shown here.

In the picture shown here, the neighboring transistors are actually the neighbors to the center transistor in its byte array. Each one of those stores a bit, and is storing each bit in space equivalent to much, much less than the width of a human hair. This is the crux of NAND Flash’s appeal in the market - you can get a ton of bits in a small space for really, really cheap.

Pictured above is the raw silicon die that NAND Flash is built on. The finger gives you a nice sense of scale for how large it is - this is the structure that gets sealed up into a nice black plastic package and sent out to embed into all sorts of devices. Zooming in a level, we can actually identify some of the circuit structures from a high level:

By this point in the series, you’ve probably got a reasonably good idea of how NAND comes together from its lowest levels to its highest. In the next post, we’ll discuss a bit more about how these architectural choices work out in terms of its operation.

While not pertaining directly to NAND Flash, one of my absolute favorite websites of all time is ZeptoBars, a Russian firm that specializes in chip deconstruction for the purposes of security analysis. Translation: they boil electronics in acid to take high-quality pictures of the silicon inside. A great resource on seeing what silicon looks like once you strip away all that boring black plastic.