well i thought it was a clever name

This is my design document for the function generator that I’ve decided I’m going to prototype, build, and probably end up selling at OSHWA Summit 2020. I’m writing it down mostly to give myself some sort of planning document to refer to when I get deep in the development weeds, and try to remember “Wait - why the fuck am I doing this particular subtask?”

I’m calling this work “bFunc” - short for “breadboard function generator”, and also a shoutout to Parliament-Funkadelic.

Let’s put the “funk” back in “function generation”. 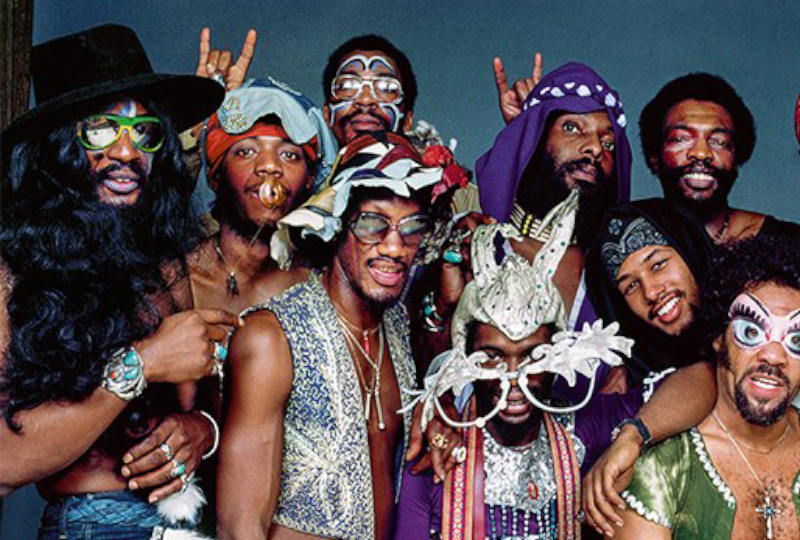 Here’s a list of learning goals for myself. These are my motivating deliverables - i.e. what I hope to take away from this project,

A rough block diagram for the hardware is as follows:

Why this MCU? Well, prototype boards are easy to come by, and there’s no shortage of existing OSHW design resources for it. Built-in USB hardware was another requirement I felt like I needed out of the MCU, and STMicro has a fairly large library of USB example code. I also wanted a chip that would run the TinyUSB stack, which I’ve also considered leveraging for doing all the USB communication on the physical board.

STMicro also has better documentation than many other manufacturers - way more so than the MCUs I typically deal with at work, anyway. (NXP! Boo! Hiss!!)

Note: I was originally looking at the Atmel SAMD21 for all of the exact same reasons I chose to use the STM32. Why’d I change my mind? See my Learning Goals - I want to learn about STM32 in particular. Plus, I got a little ways down the design road for Atmel, and found that they have basically zero software support for developing on Mac OS X, which is what I run at home. Disqualified!!

I could have gone with a beefier, more full-function DDS chip, but after considering the options, I decided to keep it a little simpler (stupid) for the first round out of the gate. The AD9837 is software compatible with its larger cousins (like the AD9833 and AD9834), but integrates a lot of the same functionality on-die:

Seems like a good idea to let this stuff be someone else’s problem for the time being.

The AD9837 also has the benefit of having a bunch of freely-available driver code from ADI on the internet.

What doesn’t the hardware do?

I had to cut some design corners, just to keep scope of this project in relative check - I have limited time to devote to this project, and the less I commit to, the less I have to get working before OSHWA.

If I end up selling every single one of these designs, then I have no reason not to start planning a more full-featured followup design with this sort of functionality baked-in. But, until then, I have to plan to keep my design commitments somewhat sane. There’s only so many hours in a day I can commit to this beast. 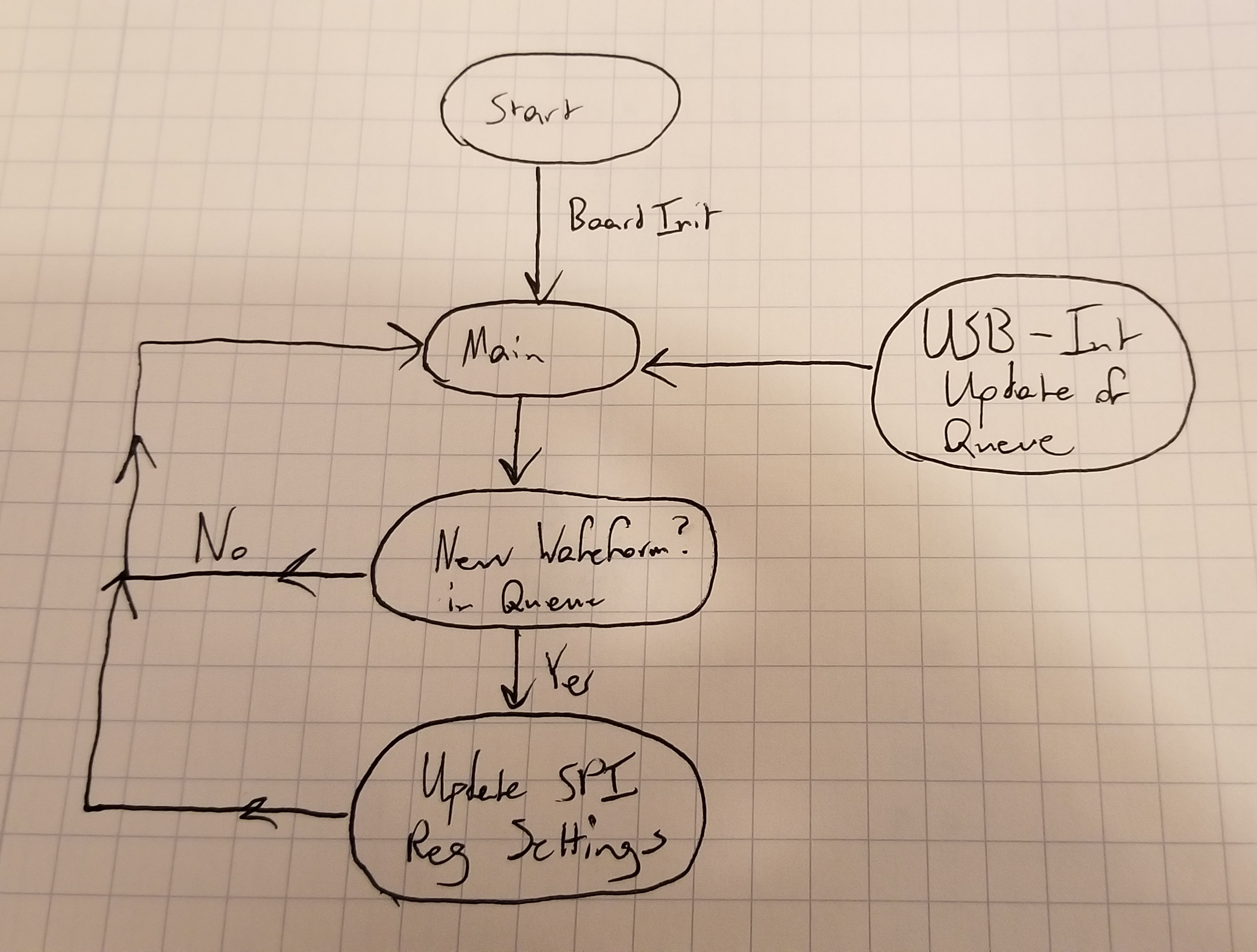 I’m pretty sure that this is simple enough to rely on a superloop design. Ideally, USB communications will generate updates to the function generator output via USB interrupts, which can be task-queued for the main loop to service on the next iteration of the master control loop. The main loop can then just make simple updates to the DDS chip via SPI writes.

I’m really only planning on supporting three types of waveform output from the start: sine, square, and triangle waves. It’s not terribly difficult to do some more advanced signals with the AD9837 (FSK modulation and sine pulses spring to mind), but I don’t think any of these are critical features to have in a first pass of a function generator.

I plan on relying mostly on STM32 code-generated init functions to get the USB stack up and running happily. Same for the SPI initialization. Next step after that is to get the SPI firmware playing nicely with the USB code. (Hopefully not too much work!) This is one of the areas I think I’ll have trouble with - I generally like to let chip vendor code-gen tools do my peripheral initializations for me, because I’m typically not trying to eke out maximal performance from them. However, I’ve looked through the STM32 USB examples, and I already know that I’ll need to learn a lot more about USB Device software to make this thing tick the way I want it to.

No fear - it’s growth potential!! (At least, that’s what I keep telling myself.)

This is the piece of this project that I know least about, and I think the one that represents the biggest possible stumbling block for me. Here’s my very rough sketch of what I think this will look like: 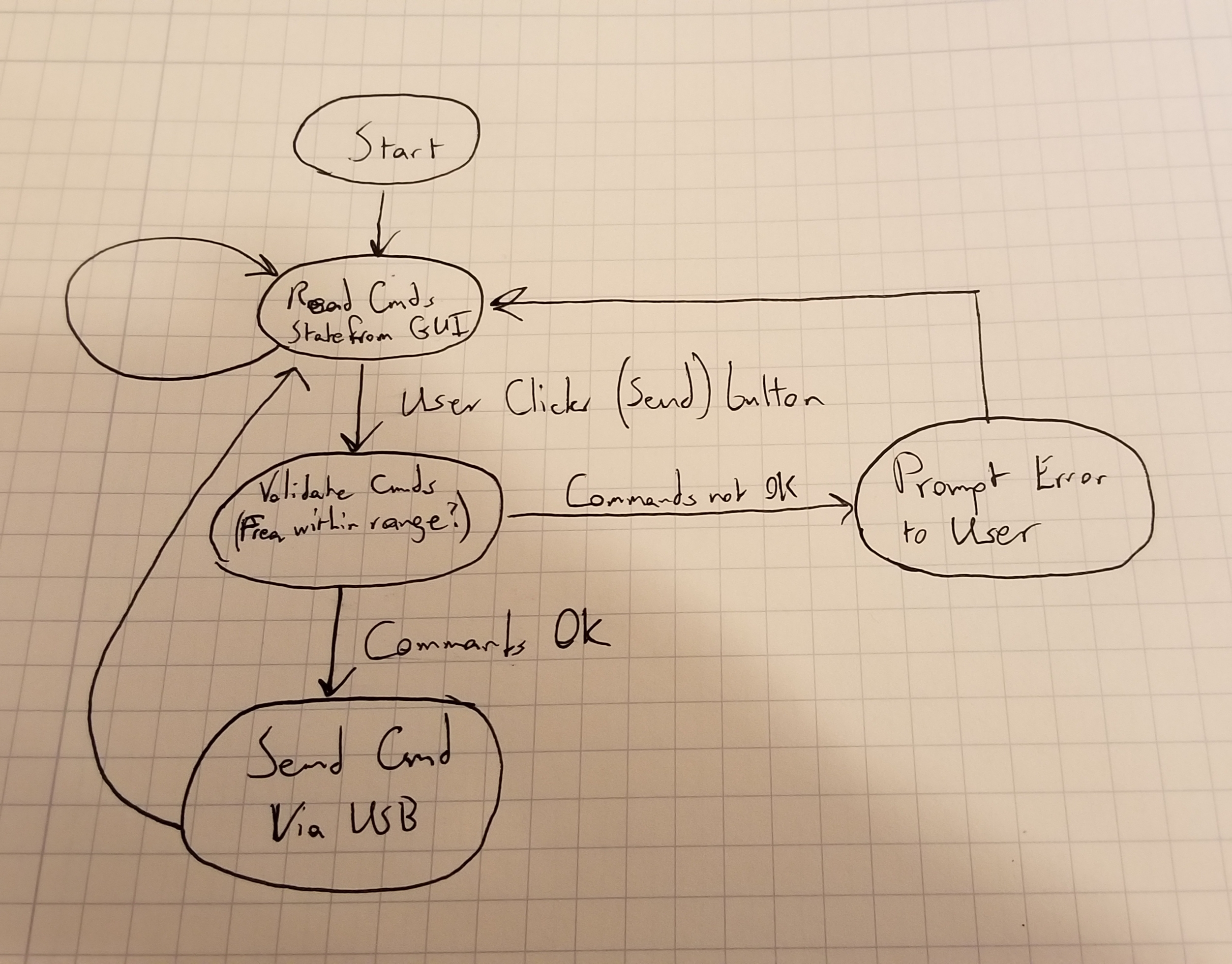 Ideally, I’d like to have a GUI that a user can adjust waveform type, waveform frequency, and duty cycle with relative ease. Yeah, I know, GUIs are the worst, and the command line is king, but real talk: I actually like the GUI interface on a lot of hardware debug tools like this. Saleae, for example, has an excellent GUI, and I frequently use it with my touchscreen Windows 10 laptop at work. It’s just a lot more convenient than the mouse in certain bench circumstances. Instead of having to figure out where my wireless mouse got lost on my workbench, I can just reach over and punch the “Start Capture” button on my screen. Scroll and cursor measurements also work pretty well on Saleae’s GUI. If I can get some sort of decent “virtual knob” going on my project, I’ll be very pleased.