It’s been a long time since I’ve done a pedal simulation, and, well, quarantine times are as good a time as any to fill time with LTSpice simulation. Since Radiohead is a too-appropirate soundtrack for the time in which we live, and Thom Yorke is a famous user, why not simulate the ProCO RAT distortion pedal?

If you’d like to follow along at home, I’ve put the LTSpice file on GitHub. Find any errors? Got any neat mods you’d like to include? Please, submit a pull request!

You may need to rustle up a diode model for the 1N914 to run - it is not one of the models included in the LTSpice install.

The interesting stuff is largely concentrated in the clipping, tone, and output stages.

The clipping stage is formed by a LM308 opamp in a noninverting configuration. R2 biases the input at 4.5[V] for maximum dynamic range in the opamp output - i.e., halfway between the 9V rail and GND. Feedback gain is set by potentiometer R9. When shorted to 0[ohm], it reduces the clipping stage to a simple opamp follower (gain=1). When set to a maximum, gain of the amp in signal bands is: \(Gain = 1 + \frac{Rgain}{(560 || 47)} = ~2300 [V/V] = ~67[dB]\) This is more than enough gain to drive to the opamp rail for even a gentle input signal. Fed raw into a guitar amplifier, this signal would completely saturate the input. That’s where the D2/D3 diode clipping pair come in to play. (Note, though, that the input saturation is desirable to some users. A common modification to this pedal is to remove D2/D3, and rely solely on opamp clipping. This yields a volume boost, and crunchier tone.)

The AC coupling network of C10/R10 works to shift the signal back to a DC balanced square wave. D2/D3 serve to clip the signal down to a more modest +/-0.65[V].

This is slightly more interesting when you move into the frequency domain, however. The net effect, as the gain increases, is to emphasize the 1kHz band of the guitar - ideally, to cut through the mix of a band. (A rock band, that is - not a frequency band.)

Note that all of these traces converge to the same rolloff asymptote. That’s the limitation imposed by the LM308’s output slew rate. At higher gain, the opamp can’t switch any faster, which limits the response of higher frequencies as the gain increases.

The tone control is remarkably simple - just a first order RC filter, with potentiometer R17 to allow the user to set the rolloff frequency. 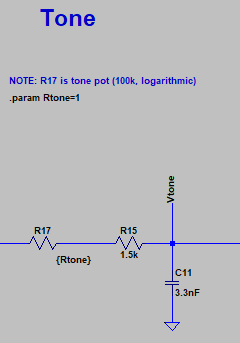 R15 and C11 set a limit of the RC filter of the tone stage at about 32kHz. Increasing pot R17 moves that corner frequency lower and lower, until bottoming out at 475Hz. This filter effectively smooths the square wave into progressively softer edges. As R17 increases, the transitions get less square, and closer to a triangular wave.

This is my estimate of who lies where on the tone curve, based on a subset of Wikipedia’s list of RAT users:

The output driver is also relatively simple - just a JFET follower, with a simple RC filter serving as a highpass filter for volume control. As R14 decreases in resistance, so does the output volume. 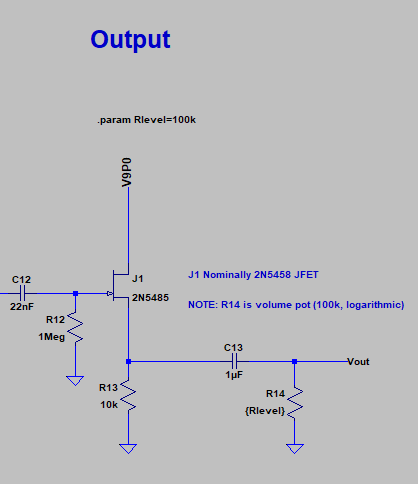 ElectroSmash, of course, is the vanguard of guitar pedal EE knowhow. I used their page of schematics and simulation output as a sanity check that I got all of this right.

You can see the slew rate limitation of the LM308 in the datasheet. Gain/bandwidth product is on page 4, under “Open Loop Frequency Response”.